On this visit, we'll tour the different scenes where Lost in Translation was shot, the most famous of all the films shot in the city. Come and follow in the footsteps of Scarlett Johansson and Bill Murray on this night tour of Tokyo. 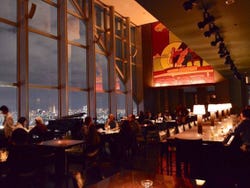 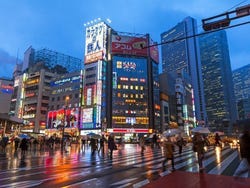 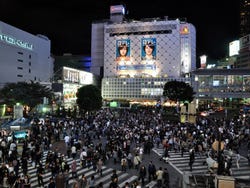 Having picked you up at your hotel, or wherever you would prefer, we'll make our way to Shinjuku, the most modern and bustling part of Tokyo, to see Hyatt Park, one of the most luxurious hotels in the city.

The 52nd floor of the Hyatt Park plays host to the New York Bar, where many of the major scenes in the Oscar-winning movie directed by Sofia Coppola were shot. Here, with incredible views of Tokyo all around, Charlotte and Bob meet, the two main characters in the movie.

With feet firmly back on the ground, we'll make our way to Yasukuni street, another common sight in the film. Yasukuni is filled with the bright lights so distinctively Japanese, and perfectly fits the image we all have when thinking of Tokyo.

Our next stop is Shibuya, another one of the areas which defines Tokyo's busy nightlife. Here the world famous street crossing, another image which screams Tokyo, can be found and also where Charlotte (Johansson) famously passed with her transparent umbrella, stopping in front of an enormous screen.

The tour then ends outside the Shibuya karaoke where Bob and Charlotte sing with their Japanese friends. If you want to enter, and put the final touch on the day singing as they did, this is your chance!

This is a private tour organized for you and your partner, friends or family.

All of our providers comply with local legislation and applicable health recommendations to avoid the spread of Covid-19.

The activity takes place with a guide that speaks in english.

You can book up until 24 hours before the activity as long as there are still places. Book now to guarantee your spot.

All services published on Civitatis are carried out in accordance with our Sustainability Code. Specifically, this activity applies the following practices: Show more

Per group from
US$ 247.60
No hidden fees or surcharges
Free cancellation up to 3 days before
Book

Free! Free cancellation up to 3 days before the day of the activity. If you cancel under this time or do not show up, you will not be refunded.

These are genuine reviews written by our customers.

I travelled with friends
10

I travelled by myself
10

I travelled with friends
Show all the reviews
like

8.30 / 10 14 reviews
Don't miss this unique opportunity for a first-hand experience of Japan's national sport - watch professional sumo wrestlers at their morning training session!
US$ 88.90
Book
like

9.90 / 10 15 reviews
The Japan Rail Pass is the easiest and cheapest way to discover Japan, with unlimited use of JR trains and even bullet trains!
US$ 300.50
Book
like

9.60 / 10 648 reviews
See the most important temples, most traditional neighbourhood and the modern face of Tokyo, the perfect introduction to the biggest megalopolis on the planet.
US$ 247.60 per group
Book