As well as varying by area within the country, the weather also varies greatly by season:

As an advantage, these are the months with the least tourism, and also normally the least rainy.

The cherry blossoms in flower are usually a good sign that the good weather has arrived. The second two weeks of March and the first week in April are usually good times to travel to Tokyo.

The summer months, especially June and July, are known for downpours and high temperatures.

The colours of Autumn make for another of the best times of year to travel to Japan. The average temperature is around 18 degrees, but the main problem is the frequent rain and the probability of gale force winds.

In our opinion, the best months to travel to Tokyo are March, April, May, October and November. It's important to try and avoid the last week of April and the first week of May, as this is when the majority of Japanese people take their holidays, making for full trains and hotels, and higher prices. 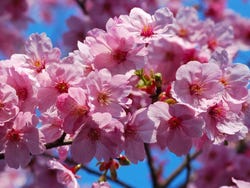