The numbers don't lie: every day almost 3,000 tonnes of fish pass through the Tsukiji market, 90% of the total of the three big markets in Tokyo.

The history of the market begins in the 16th Century, when Tokugawa Ieyasu, the first shogun of the  Tokugawa shogunate made Edo Japan's capital.

Tokugawa Ieyasu brought fishermen from Osaka to provide fish to the Edo castle. These fishermen began to sell what was left over around the Nihonbashi bridge, which gave rise to the original Uogashi market.

As the population grew and demand grew with it, the little stalls of Uogashi were transformed into a full-blown market. The Shogun created his own network of distribution and amassed great wealth as a result, something that was abolished under the Meiji restoration and the subsequent decentralisation.

As time went on different markets sprung up, but they all came to the same end: the great Kanto Earthquake destroyed more than 20 of the markets.

This was when the Tsukiji market was conceived, as Tokyo's central market.

If there's one thing in the Tsukiji market that interests tourists from all over the world, it's the tuna auction. Every day between 5 and 6:15 am tonnes of freshly caught (and frozen) tuna is sold.

Here you can see the appraiser's inspection, the auction itself and the 'life cycle' of a tuna, where it's picked up and taken to be cut and eaten.

Due to the early time of the tuna auction, we've got two great ideas for when to visit. Either visit on the day after your flight, with the jet lag making the early morning a little easier, or the day you plan to take the train to Kyoto, which is a good opportunity to catch up on a little sleep.

Don't wear flip flops or high heels, this is a fish market, and you can imagine the state of the floor...

All Japanese people agree on one thing; the best place to eat sushi is around the Tsukiji market. Here you'll find restaurants open from 5 am until midday, with the freshest fish in town! 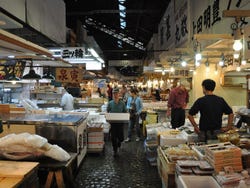 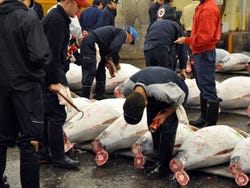 Checking the quality of the tuna 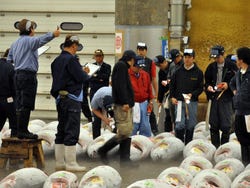 Tuna auction in the Tsukiji market 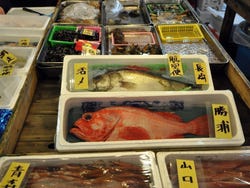 Tuna auctions take place between 5 am and 6:15 am

Metro: Tsukiji Hibiya (H) line.
To get to the tuna auction it's best to get there by taxi.