Nikko lies 35 km to the West of Utsunomiya, the capital of Tochigi Prefecture, and has a population of just 84,197. But its touristic importance outweighs its small size: lovers of nature are sure to be enchanted by the Nikko National Park, which contains two waterfalls (Kegon Falls and Ryuzu Falls), two mountains (Mount Nantai and Mount Nikko-Shirane), as well as Lake Chūzenji.

Contained within the national park, and the main attractions in the Nikko region, the  Temples of Nikko UNESCO World Heritage Site is comprised of 103 sacred buildings and structures, belonging to two Shinto shrines (Fushan and Toshogu) and one Buddhist Temple (Rinnoji).

The Shinkyo (sacred bridge) of the Futarasan Shrine is a place of great cultural importance, and the gilded, perfectly restored decoration of the Three Buddha Hall in the 1,200-year-old Rinnoji Temple are highlights, but of the three, the most famous is the Toshogu shrine.

Built in 1617 and in honour of Tokugawa Ieyasu, the founder of the Tokugawa shogunate, the last feudal government to reign Japan between 1603 and 1867. The shogun's remains are still entombed in the shrine, and a five storey pagoda dominates the area, with lavish wood carvings throughout.

Worth highlighting in the Toshogu shrine is a carving over one of the doors. Three monkeys, in the now common pose, covering eyes, ears and mouth to represent "see no evil, hear no evil, speak no evil". But, although the maxim itself comes from Chinese Confucianism, its association with monkeys comes from this very carving.

The Japanese love wordplay, and the Japanese translation for 'see not, hear not, speak not' is "mizaru, kikazaru, iwazaru", with "zaru" also meaning monkey. Thus the idea of three monkeys, now so common, came from this play on words, and its first record is in the carvings of this temple, perhaps inspired by the Japanese macaques commonly found in and around Nikko.

Getting to Nikko from Tokyo

The best way to discover Nikko's stunning heritage is by reserving an excursion from Tokyo with an English speaking guide. this way, you'll make the most of the city's charm. You can reserve the excursion directly from our website. 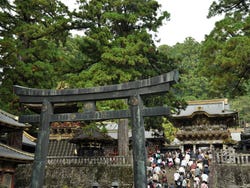 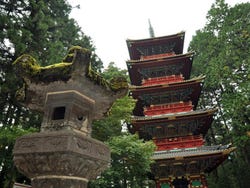 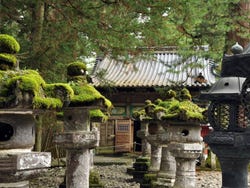 The natural and the spiritual in Nikko
3See photo gallery 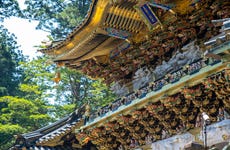