The majority of the urban buses take routes that connect train stations, meaning using them is not as difficult as it might at first seem.

One negative, however, is that the last bus runs at 10 pm,

The price of a single ticket is 210 yen. Children under 12 pay 50% and babies less than a year old travel for free.

Pay when you leave

One major difference to buses in the rest of the world, on Japanese buses you pay when leaving the bus, not when getting on.

If you don't have a transport card, you should pay with coins or a thousand yen bill in the corresponding slot.

Is the bus recommendable?

It's true that, with the Yamanote line, metro, and other train lines, it's not particularly logical to take the bus when visiting the city. It's more complicated and slower than the other means of transport available. 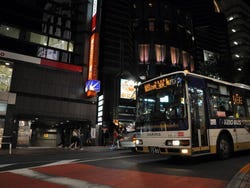