Although both cards are independent (Suica comes from Japan Rail, and Pasmo from other companies), both cards are compatible and can be charged and used in the same places.

Outside Tokyo the Suica card is more widely accepted, therefore it's the best option for those travellers who are going to travel outside Tokyo.

The Suica card initially costs ¥ 1 (US$ 0), of which 500 is credit and the other 500 goes as a deposit. This deposit is returned when you return the card to the Japan Rail (Suica).

Where can you buy it?

Little by little the Suica/Pasmo card has begun to substitute cash money. These days you can pay in vending machines, shops, and some restaurants near the stations using these cards. 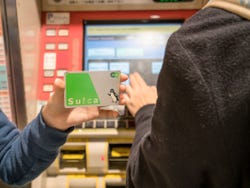