Mount Fuji, a stratovolcano dormant since 1708, is perhaps the most popular and enduring image of Japan. Its almost perfect cone, capped with a distinctive layer of snow has made it a source of constant inspiration to Japanese artists since 1600 when Edo became the capital of the nation and the mountain became a common sight on the road to the city.

Perhaps its most famous depictions are in the "Thirty-six Views of Mount Fuji", a series of landscape prints by the Edo period painter Hokusai. The most famous, and perhaps the most famous of all Japanese art, is his 'great wave' where three boats are threatened by an enormous wave, with Mount Fuji serenely standing in the background.

Fuji is one of three holy mountains in Japan, along with Mount Tate and Mount Haku with both Shinto and Buddhist shrines in the foothills recognized as UNESCO sites of cultural interest. Every year around 300,000 people hike one of the four major routes up to the peak.

Taking a day trip from Tokyo is the best way to visit this legendary symbol of Japan. If you're interested in visiting Fuji by land, sea, and air, check out our exciting day trip at the link below: 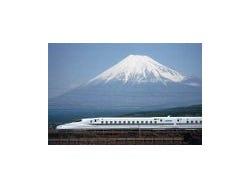 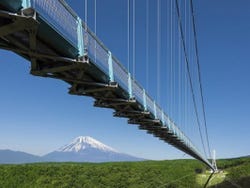 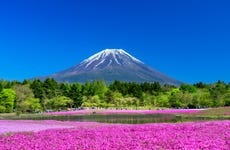